there are more articles linked at the foot of the page 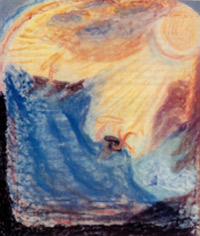 In the depths of sorrow, disappointment and shock, the genuine heart-felt wishes of friends and colleagues is, of course, a comfort and a momentary respite from the anguish of loss, but what are the truly effective steps one can take as an individual at such a time?

One step is to commit our love, use our unique talents and engage our will for the benefit of others in a similar or more painful situation. In surrendering to a selfless act of giving, stripped bare of all emotional trading, we can be revived by the ever-present rhythms of angelic sacrifice that pulse into the earth and into our humanity. Another effective step towards recovering our equilibrium is to hold on to a belief that, no matter how devastating our loss may be, something will appear, often of a totally unexpected nature, to lead the suffering soul into a new sphere of knowledge and revelation.

For Rudolf Steiner, the destruction of the first Goetheanum by fire was a devasting blow. Yet, even under the weight of such an overwhelming loss, he was able to give of his love, utilise his great talents and engage his extraordinary will to ensure that Anthroposophy continued to flow into the hearts and minds of those willing and able to take on the spiritual challenges of a new age. And the unexpected gift? What was it that came to lighten the weight of his sorrow and make such a profound impression on him during the summer of 1923?

In August of that year, Rudolf Steiner gave several lectures in Britain and during the tour he visited Ilkley Moor and Penmaenmawr to see remnants of our Megalithic culture. It seems that the sensations and revelations he experienced at these grand and beautiful sites did much to heal his sense of loss and to inspire a new train of thought, the essential nature of which was to shine through many of his subsequent lectures during the autumn of 1923 and on into the Laying of the Foundation Stone at Christmas.

In order to explore the true nature of what he experienced at these ancient sites, we must make a study of the pastel sketch entitled "The Druid Stone", drawn by Dr. Steiner on his return to Germany. The rich colours and the bold strokes draw us into a luminous earthly and elemental world, a mid-summer celebration of the Sun Mysteries and a threefold view of Man poised in service to the Earth and in praise of the heavens. The magnificent setting of the Penmaenmawr stone circles must have contributed greatly to the dramatic effect of this drawing. The circles are set in a glorious landscape and show the care and vision with which these sacred sites were chosen. The initiates of the age chose places where the earth radiated its core spiritual substance into the atmosphere, and once there, it could be "read" and celebrated in the acts of worship. They gathered at stone altars, no longer situated in the underground temples of a previous age, like New Grange, but open to the star-radiant sky and the physical rays of the sun and the moon. High on a rocky promentary, the Penmaenmawr circles face into a roaring northwest wind that sweeps across the Irish Sea and blows over Ynes Mon, the island where once a great Druid centre of initiation thrived.

It is clear that this site moved Rudolf Steiner deeply. With his spiritual vision he was able to look down on the two circles with a pilot's eye view and see in them a similarity to the first Goetheanum; "If it had been possible to go up in a balloon and look down on those two druid circles, ignoring the short distance between them, we would have seen - and it was deeply moving that this was so - the same ground-plan as for the burned-out Goetheanum in Dornach".

For centuries, the celebration of Earth's great mysteries were directed by people who could transpose and integrate themselves with ease into the conciousness of everything around them, and to this activity they added the rich hues of ecstatic reverence and gratitude. The whole deed was then "painted into" the swirling interplay of elements around the locality. "The Druid priests selected (these) special sites where they were able to effectively engrave into the astral atmosphere, the imaginations which they were called upon to create from the mysteries of the universe".

The Druid Stone sketch represents the shimmering imaginations that resonate in the astral atmosphere of places like Penmaenmawr and Ilkley Moor. At the bottom right of the piece, a figure is kneeling and touching the pure, clean, wrought-work of the physical earth, her mantle folded back to reveal the exquisite blue crystaline forms that are a glowing expression of divine cosmic will. On the second plateau, a figure is bending down before an altar, actively engaged in the ceremonial deeds of worship. The symbol of a spinning lotus flower indicates the priestly duty of raising the group soul to the eye of the spirit, thus enlivening the spiritual organs of perception within the tribe. The sun's rays shine all around this figure, enlightening and invigorating the process. At this point, it is important to bring our attention to the shadows made by the altars; they are very pronounced in the drawing and hint at the fact that, under certain conditions and at certain seasons, the druid priests would consult the shadows cast by the stones. The spiritual rays of the sun would penetrate through the stone and into the earth. What the initiates saw in the shadows, clairvoyantly, was what could be experienced by the soul in sleep, or during the mystical death of initiation. It was an opportunity to receive direct knowledge of the spiritual laws of the Earth.

On the highest peak, surrounded by three stone altars, a figure stands erect, anchored to the earth and yet wholly given over to the splendour of the physical and spiritual sun. Meditating on the rich colour and luminosity of this lofty altar, we can step into a Great Imagination. An imagination where the high priests of the era are standing in solemn awe at the Turning Point of Time, watching the whole tapestry of elemental and spiritual life on Earth "receiving a force of Ascension which would enable it in the far distant future, to loose its planetary character and become a Sun". The Christ, whose incarnation had been foreseen for thousands of years, had entered into the body of the Earth.... We can only look with longing at this sun-lit figure on the high plateau, who seems to have gained the physical and spiritual strength to observe the full might of the Solar Mysteries. Then finally, beside the sun, we see the great countenance of Archangel Uriel, his solemn gaze watching the descent and ascent of Man in these three active figures, symbols of the historical evolution of the conciousness of Man.

When we approach the great standing stones of Britain today, they taunt our twenty-first century intellect and challenge us to uncover their ancient mysteries. Yet, only if the intellect is joined with the heart forces, stripped of its dry competitive cleverness and immersed in profound reverence and gratitude for Earth's great gifts, will the stones and their shadows begin to gift us with a vision of their enduring earthly and stellar wisdom.

Seventy six years after Rudolf Steiner's visit to north Wales, a party of friends walked through a swirling mist and over the high moorland above Penmaenmawr. They were carrying an urn with the ashes of one of the most elegant and original priests of the Christian Community, Rev. Rachael Shepherd. By the great stone circle, a small trough was dug into the ground and her ashes were placed inside; a posy of bright autumn flowers was then arranged on top and the whole covered over with earth. The great, still stones gazed down at the ceremony and welcomed back "one of their own". When she celebrated the Act of Consecration of Man at the altars of the Christian Community, Rachael always showed herself to be a wise and impeccable Priest. In the realm in which she now dwells, I wonder, can she see across the millennia to the thriving communities celebrating around the stone circles and altars of these isles? ...and can she see the glittering, luminous thread that links the great acts of consecration that resound through the ages?

An Article by Susan Raven